Ripoll and the Ripollès 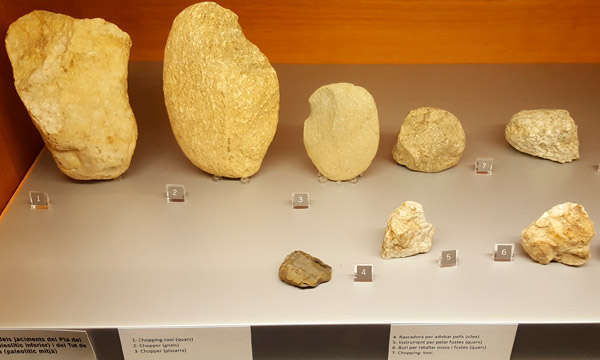 The Pyrenean valleys were inhabited from the lower Palaeolithic period (about 200,000 years ago) when interglacial warmth allowed early human settlement. The prestigious anthropologist from Ribes, Eudald Carbonell, leading the Grober Xaialsa team, carried out one of his first archaeological studies in the Ripollès during the 1960s. The finds from the Pla del Roser, at Sant Joan de les Abadesses, date from this prehistoric period. A series of digs were also carried out at Tut de Fustanyà, in Queralbs, which provided remains from the middle Palaeolithic, and another near the Palou farmhouse, at Campdevànol, where some upper Palaeolithic finds appeared.

These had been the sites of remote camps that subsisted through hunting. Remains of subsequent cultures – the Neolithic, Bronze and Iron ages – had already been found and evidence goes right through to the period of Roman domination. Important archaeological elements from these periods in the county were discovered in Les Encantades cave in Rialb and Roc de les Orenetes in Estremera torrent (Queralbs).

Of the collection of materials from the excavations, the cases show remains of humans and animals, stone objects, funerary urns, decorative items and pieces of ceramics, bronze and iron.

In the twenties some investigations were made in the region, the results of which are displayed in the area set aside for dealing with the origins of the museum.

Human settlement in the valley goes back to prehistory. It was later also occupied by successive invading tribes until it was consolidated in the 9th century with the foundation of the monastery of Santa Maria by Count Wilfred the Hairy during the process of resettling the region, when the embryo of what would become the town of Ripoll began to grow up around it.
The monastery, entrusted to a religious community of the order of Saint Benedict, was subject to structural alterations between the 9th and 11th centuries. It was precisely in that century, in the time of Abbot Oliba, that it arrived at its current distribution. The portal, a stone representation of biblical iconography, was put up in the 12th century.
The group of monastic buildings were separated from the town by a wall and the Abbot was a feudal lord over a good part of the region and over the society of Ripoll, controlling the political, economic and judicial spheres as well as its urban development. Good examples of this would be the construction of a canal during the abbacy of Arnulf or the authorisation to build a hospital in the 16th century.

It is not surprising, then, that from the 13th century onwards the people of Ripoll tried fruitlessly to free themselves from feudal oppression. In the 14th century, the monastery established the community of priests of the church of Sant Pere, which, over time, became the symbol of the town’s opposition to the abbot’s power. There were also disputes between the two institutions for religious supremacy – Sant Pere was the parish church of Ripoll – and between the abbey and the inhabitants of the possessions it had all over the Principality.

These factors aggravated the decline into which the monastery had fallen, which ended in defeat in the first half of the 19th century: the town achieved independence in 1812 and, in the context of the First Carlist War (1833-1840), the minister Mendizábal promoted the secularisation of monastery’s assets by the State and the eviction of the monks.

The occupation of Ripoll by Carlist troops in May 1839 saw the destruction of many houses.

Once the armed conflict was over, they were rebuilt with material from the abandoned buildings of the monastery site, which was used as an improvised quarry.

In the second half of the 19th century, periods during which work was carried out to consolidate the church alternated with others when the deterioration worsened. It was not until 1886 that the restoration of the basilica and cloister began, according to the design of the architect Elies Rogent and under the auspices of the Bishop of Vic, Josep Morgades. Although the works continued until the beginning of the 20th century, they were officially finalised in 1893.